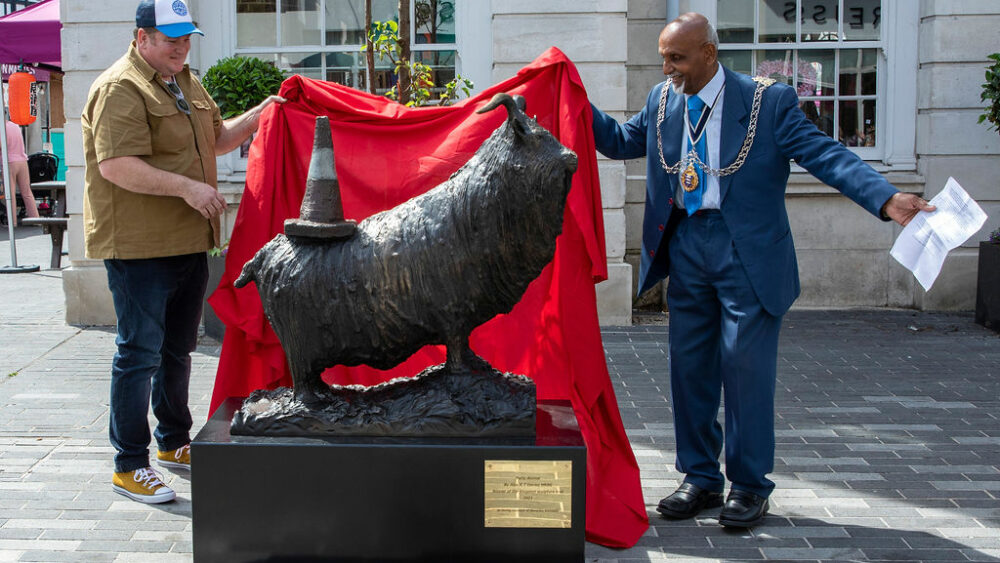 Last week, a new piece of public artwork for Kingston upon Thames has been permanently installed in the Ancient Market Place; a lasting legacy of the Kingston Sculpture Trail which ran last year. Party Animal by Alex Davies MRSS was officially unveiled with a small ceremony on Thursday 16 June to celebrate its arrival.

Davies (pictured below) is a locally-based sculptor who runs a fine art foundry, Milwyn Casting Ltd, in West Molesey. His sculpture depicts a bronze goat which stands proudly with a traffic cone on its back. The viewer is invited to sit on the goat’s back, and rub its shiny golden heart-shaped nose.

Party Animal was one of seven sculptures that made up the trail, a project organised through a partnership of Kingston First, Kingston Council, Canbury Community Trust and Kingston University which ran from August to October 2021. Local residents and visitors were asked to vote for their favourite and almost 1700 people responded to the voting survey, with Davies’ sculpture winning 51% of the vote. 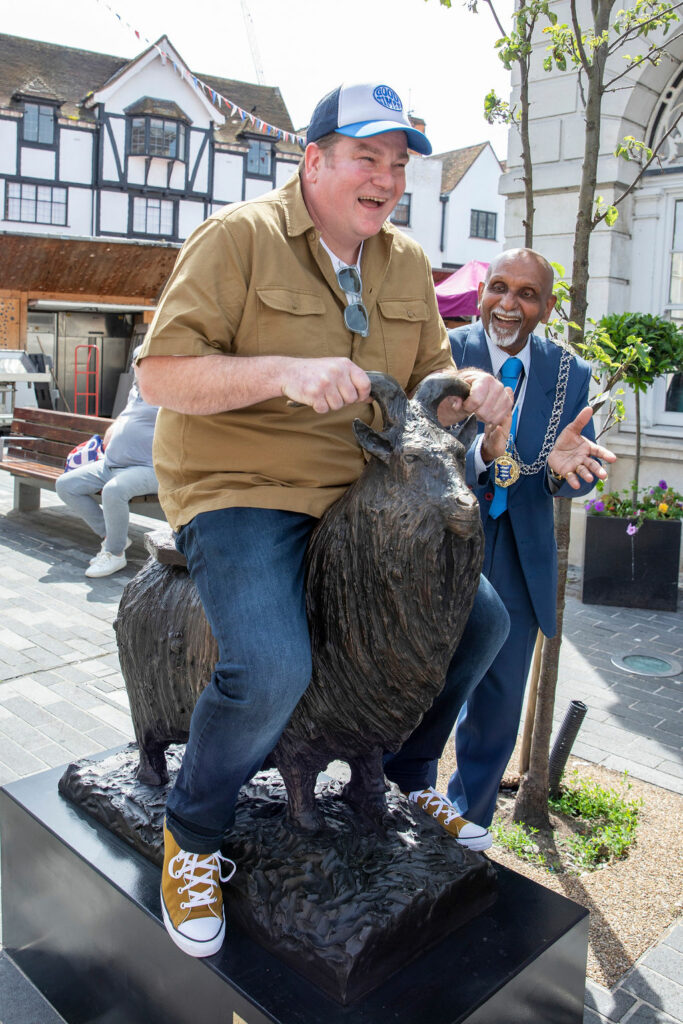 “It’s been a great experience being involved in the Kingston Sculpture Trail, made all the better by the positive feedback I have had and of course winning the vote.  It is a real honour to have a sculpture chosen to be permanently sited in Kingston, a town that I have visited many times growing up in Surrey, having worked there as a teenager, to now having my own business and workshop so close.”

“Public artwork adds richness and individuality to town centres, and is central to our shared vision for Kingston’s streets and spaces. We’re thrilled to see Party Animal permanently installed as a lasting legacy to our first-ever Kingston Sculpture Trail, strengthening the fantastic local heritage, arts and culture offer in Kingston. We hope that lots of people will enjoy this exciting new addition to the town centre.”

“This is Kingston’s version of the boar statue near the Uffizi Gallery in Florence. The nose of “Porcellino” is golden from the number of tourists rubbing it for luck; the cone on the back of Alex’s goat is going to be just as shiny. It’s going to be a very popular piece.”

“Thank you to everyone who took part and voted for the amazing sculptures, and to the artists behind them. We want to diversify the offering in our town centres and high streets so people visit them for the culture, leisure and entertainment as well as going shopping. The Kingston Sculpture Trail reinforces the council’s commitment to supporting arts and culture as an integral part of our wider economic recovery, and we are delighted that Party Animal will be around for visitors and residents to enjoy.”

“Alex R T Davies’ Party Animal is a fantastic addition to the landscape of Kingston and a sculpture the local community and visitors can enjoy for years to come. It’s been a real pleasure working in partnership with Kingston First, the Royal Borough of Kingston and community groups, and for my colleagues from Kingston School of Art to be able to contribute. Our students have also enjoyed opportunities to take their work out into public settings in previous projects and I hope there is further collaboration in the future.”

The project was organised through a partnership of the Canbury Community Trust, Kingston Council, Kingston First and Kingston University. The trail was launched in August 2021 and ran for three months, ending on October 31. After an open call to artists earlier in the year, the entries were considered by a selection panel which was chaired by David Mach RA and also included two local students. Seven sculptures were chosen and publicly sited across the town centre and Canbury Gardens for everyone to enjoy. The public vote for the winning artwork closed on 31 October 2021.

All of the trail’s branding and visual identity (including the logo, background and all supporting marketing collateral) was created by three talented Kingston University students; Imogen Ashby, Esdras Da Costa and Sophie Smith. The work was commissioned through Studio KT1, a creative agency powered by Kingston School of Art which provides students with valuable industry work experience before graduating.

To find out more about the sculpture trail and the seven sculptures which were installed, visit kingstonfirst.co.uk/sculpture-trail/

Alex R T Davies has been making sculpture and other objects, mostly in metal, for the last 30 years. During this time he has exhibited his sculptures in a number of exhibitions, art fairs and sculpture gardens.

A member of the Royal Society of Sculptors, Alex’s work has recently featured Goats as an inspiration and starting point. The Goat is such a diverse animal, it has adapted to most environments, from deserts to mountains. In art, the Goat has been used from Egyptian paintings, to cultural icons, to a metaphor for agriculture, to symbolism for good and evil. After leaving art college in the early 90’s, he set up an artist blacksmith business (Red Forge) making and designing commissioned sculpture, furniture and architectural Iron work. By 2000, he started working in bronze, casting for many well known artists and managing foundries in Corsham, London and Essex. In 2008 he moved back to Surrey to further establish his own Fine Art Foundry,  Milwyn Casting Ltd, which is based close to Kingston, in West Molesey, Surrey.

Recent highlights as an artist have been the 10 Gram Challenge, devised and produced by Alex, a response to the first coronavirus lockdown. He invited Members of the Royal Society of Sculptors to make sculptures using 10 grams of provided wax, which was then lost-wax cast into bronze. Over 200 sculptors were involved with the results exhibited in June 2021 at Dora House (home of the RSS). Another highlight was having two sculptures, Party Animal and The Kiss, selected for the Kingston Sculpture trail. He was also shortlisted to produce a live sculpture for the UK Pavilion at Expo 2020 Dubai.

Kingston First is a business improvement district (BID) which operates within Kingston town centre. It is a not-for-profit company funded by a levy which is used to provide additional projects and services to those provided by Kingston Council and other public agencies. Our work focuses on four key themes; Attractive Streets & Spaces, Marketing the Town, Supporting & Informing and Influencing & Representing. 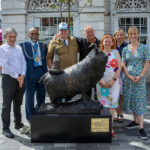 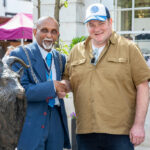 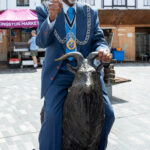