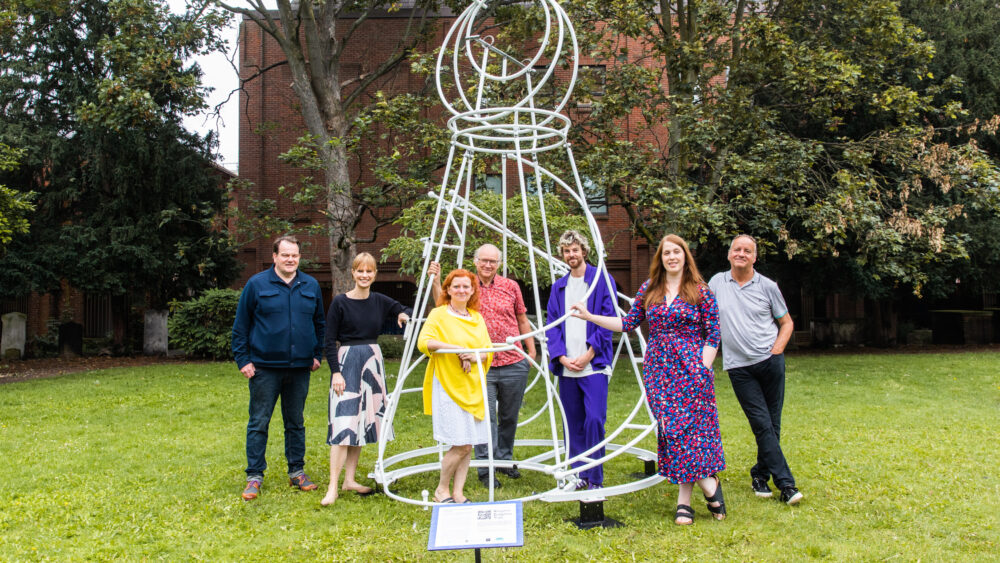 Seven exciting contemporary sculptures have been installed in Kingston town centre as part of the new Kingston Sculpture Trail which launched over the weekend  (14 August 2021). The trail runs across the town centre including the riverside and Canbury Gardens, north of the town centre, and will be in place for up to three months. Residents and visitors are being asked to vote for their favourite sculpture, with the winning artwork becoming a permanent feature in the town centre after the trail ends. Visitors to the trail should look out for information signage boards nearby to the sculptures where they can scan the QR code to access the voting survey.

The seven sculptures are:

An open call to artists earlier this year saw submissions from artists from Kingston and beyond to be considered by the sculpture trail selection panel. The panel included two local students and was chaired by renowned international artist David Mach RA (creator of the iconic red phone box sculpture ‘Out of Order’ 1989 on Old London Road).

The panel met at the end of May to decide which artworks would form part of the trail, which also incorporates existing public art including the new eleven-metre long, three-channel outdoor video projection ‘Echolocation’ (2021) from Mat Collishaw, and Carole Hodgson FRSS’s 1986 wall-based sculpture of Icarus holding a Sopwith Camel in the Cattle Market car park.

The project has been organised through a partnership of the Canbury Community Trust, Kingston Council, Kingston First and Kingston University. All of the trail’s branding and visual identity (including the logo, background and all supporting marketing collateral) was created by three talented Kingston University students; Imogen Ashby, Esdras Da Costa and Sophie Smith. The work was commissioned through Studio KT1, a creative agency powered by Kingston School of Art which provides students with valuable industry work experience before graduating.

“We’re on the streets now and the public has their chance to express their opinion and pick out their favourite sculpture. It’s an important part of the whole process. We, the judges, have done our bit, we’ve made our decisions, now the sculptures are on site let’s see what the audience makes of it all. Congratulations to Kingston on running a smooth operation, a good selection of proposals, a good selection of judges including two local students whose decision making I thought was particularly important and now, here we are at the ‘proof of the pudding’ stage.”

“Seven exciting new artworks by world-class artists have been installed in Kingston, contributing to its strong and varied offer and creating connection between the town centre, riverside and Canbury Gardens. The vote is now open for residents and visitors of the trail to choose their favourite sculpture,  an incredible legacy from the trail which will remain a permanent feature in the town to be enjoyed for many years to come.”

“The launch of Kingston Sculpture Trail features seven wonderful new artworks that will encourage residents and visitors to come and enjoy the trail in the town centre. We are so excited to be part of this innovative project that supports arts and culture as an integral part of our wider economic recovery.”

“I’m delighted that Kingston School of Art and Kingston University have been able to support this exciting project for the borough, and know that these commissions will be great additions to the town centre. The chosen sculptures will engage visitors through their story-telling, creativity and playfulness to encourage participation in their environment and offer a moment for reflection.”